How did Ecommerce Perform in January?

After a negative November, and December (although slightly better) it seems no surprise that January growth was in the negative too—latest market YoY revenue was down -24.4%. Whilst it’s usually a slower time for retail generally, 2022 was lower than 2021, suggesting there was even less activity than last year. This is likely due to the fact we were still in a UK lockdown in 2021, making growth rates unusually high as shoppers were forced online. However, in 2022 the high streets have reopened, and multichannel retailers aren’t seeing the same growth as they’re used to.

On the positive side, we can expect to see a balancing of this unusual YoY measure (where the current year’s growth appears very low compared the extremely high growth of the year before) from April 2022, as this matches with when the high streets reopened April in 2021. 2020 was a year of high growth, and 2021 a year of low growth, so by April 2022 we can expect these two strange years to have cancelled one another out, and from then on, show a more accurate measure of industry growth.

The graph below shows YoY revenue growth throughout January, and the trend shows that growth dropped week by week. This could be due to shoppers having spent their Christmas money by the end of the month, and the forever prevalent headlines about inflation, now reaching all-time highs. As of the 23rd of January, growth was down -24.4%.

As for growth across the entirety of 2021, we can see that January 2022 is following its downwards trajectory from the months before. December suggested that growth could be clawing its way back up from the negative, whilst January confirmed that this was not yet the case for online retail. 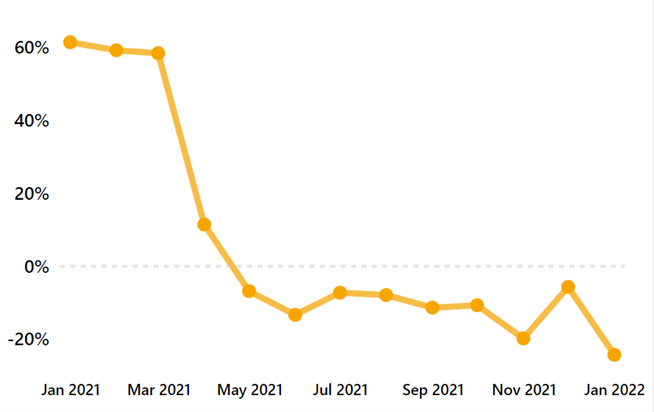 When we look at category performance for January, matched against the year before, we once again see the same trend. It’s been a turbulent time for retailers, as growth simply cannot match that of the lockdowns. Clothing has done particularly well – recovering from poor previous growth – with womenswear, menswear, and footwear all bringing themselves back into the positive too. However, the rest of the categories are in the negative.

Although it’s been a bleak January for retailers, spring in just around the corner, and by April the YoY measure will be a better indicator for ecommerce growth. Retailers can look forward to plenty of opportunities for expansion.

How Did Ecommerce Perform in December?

How Did Ecommerce Perform in February in the UK?

At the end of February, IMRG tracked the lowest Year on Year (YoY) UK growth ever recorded in the...

How did UK ecommerce perform in March?

The ecommerce market has been put under extreme pressure recently, with geo-political issues such...