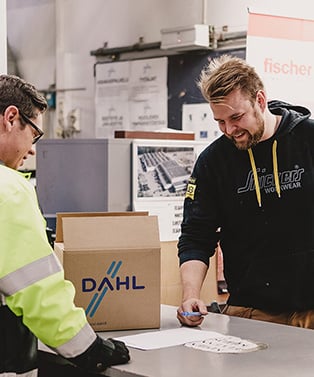 Dahl Suomi is part of Fortune Global 500 company, Saint-Gobain – a French multinational that designs, manufactures and distributes a wide range of materials used in buildings, transportation, infrastructure and industry. As Finland’s leading wholesaler of HVAC (heating, ventilation and air conditioning) products, Dahl Suomi sends more than 500,000 packages a year to business customers across the country. Using nShift has helped them ensure that every package is delivered by the right carrier to the right place at the right time.

Before nShift, Dahl Suomi were relying on workers at warehouse sites across Finland to manually enter the data generated by their custom-built ERP. This was causing multiple issues, including slowing down the delivery process and incurring unnecessary carrier costs. And, inevitably, mistakes were being made in the manual data entry process, leading to higher rates of customer dissatisfaction and increased pressure on the customer support team. What the business needed was an integrated delivery management system that would automate the process at every step.

with WMS and in-house ERP

One is time and cost savings: automation has significantly reduced the time spent manually entering data and has helped the company to optimize its carrier spend.

Another is data. Vaino Pokki, Training and Development Specialist within Dahl Suomi’s logistics team, explains. “Thanks to nShift, we now have lots of package and shipment data that we can analyze to identify more effective delivery routes. This helps us not only reduce costs but also improve our delivery services, which ultimately enables us to grow revenue as well – because better, faster deliveries create happier customers, which leads to more sales.”

The other area where nShift Delivery Hub has made a real difference is visibility. “Lots of customers call us asking when their packages are likely to arrive,” Vaino says. “Now, all we have to do is go into the nShift portal and we can immediately see which carrier has taken it for delivery and where it is in the process.” Having this level of visibility reduces the amount of time devoted to customer support significantly, as team members can now instantly provide customers with an accurate estimate of when their deliveries will arrive.

And that’s not all. Vaino has also been impressed by the versatility of nShift DeliveryHub. The fact that it integrates seamlessly with other systems means that teams at different sites are able to use and experience the platform in very different ways. “At our smaller warehouses, for example, team members interface with nShift directly. But at our large Helsinki warehouse, where we have implemented a WMS, it works away invisibly in the background without people even really knowing it’s there. So while everyone is connected to the same system and data, the user experience can vary according to the needs of the team.”

Thanks to nShift, we now have lots of package and shipment data that we can analyze to identify more effective delivery routes.

Atea gets total control of inbound packages with nShift