With the development of RFID technology in freight labels, it is now possible to track parcels sent as letters with nShift just as easily as it is to track larger packages. This has made a huge difference to the quality of the delivery service that companies like Hatstore Scandinavia AB can provide.

From its warehouse just outside Kalmar, Southern Sweden, Hatstore Scandinavia AB has supplied customers all over Europe with caps and hats since 2011. In November 2016, they started to send small parcels to Norway with RFID labels using the Bring product, Pakke i Postkassen [packages in the mailbox], powered by nShift.

Before then, it was impossible for the company to track and trace its small parcels, meaning that deliveries did not always arrive as quickly or as accurately as possible – and customers were unable to follow the progress of their deliveries and so did not feel involved in the shipping process.

As Filip Klasson, Vice President at Hatstore Scandinavia AB, says: “An RFID printer and labels with RFID microchips are more expensive than normal label printers and labels, but it is worth the investment.”

Everything you need to know about RFID

By using nShift to print RFID labels, Hatstore is able to book, print and track all shipments in one system, and send notifications to customers to let them know that their delivery is on its way.

This is made easy by an integration with the company’s webshop supplier – an integration that proved quick and simple, as Filip Klasson explains. “Our webshop supplier just made an XML file, which was integrated in [nShift]. This minimizes the number of steps it takes to print labels, which makes the entire shipping process run more smoothly.”

Since implementing RFID technology, enabled by Shift, Hatstore’s Customer Service Department has seen an enormous reduction in the number of delivery-related inquiries they are having to manage. According to Dardan Drini, Customer Service Leader at Hatstore, “Issues concerning tracking of parcels have dropped from around 10 per day to just one. And in the few cases where a customer calls in to enquire about a delivery, we can find the parcel easily in [nShift] using the order number, name of the receiver or phone number.”

Issues concerning tracking of parcels have dropped from around 10 per day to just one. 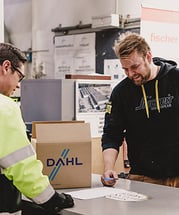